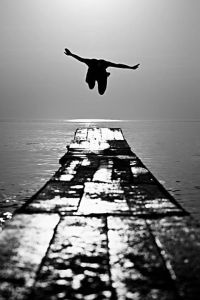 Years ago, I was at the office and looked down at my hand and saw a red dot. I was convinced beyond any reasonable doubt that I had contracted AIDS or cancer or Ebola or what ever that disease was I’d heard about on National Public Radio that morning driving to work.

I knew that it was going to be a horribly shameful and agonizing death. I also knew that if anyone found out that I had the illness I’d be ostracized and quarantined from society. Dude… this death was going to be as horrible as anything that happened to Jesus or those in the Holocaust . It sucked to be me…

Every single day for the next 18 months I obsessed about the red dot. The red dot controlled me… it was an ever-present secret that was there to destroy me. I was so afraid of the red dot that I would not go to the doctor to have it checked. There was no blood or lab work, CAT scans or surgery because I couldn’t face the reality of the red dot. I didn’t need a second opinion because I wasn’t getting a first one. Don’t make the dot angry and it won’t kill…

Then one day I was talking to my mother and looked at her hand and there it was … a red dot! Damn! It must be contagious…

Immediately… I asked her what it was and I will never forget what she said…. “it’s a red dot!” “Everyone has them… you were born with one on your hand I think…”

Suddenly, every fear I had about the red dot was gone… 18 months of my life had been dedicated to dying instead of living. Cancer is real… AIDS is real… Ebola is real… the red dot is nothing!

Knowledge is power… fear is not…

Getting sober is one of the most terrifying acts an addict will ever attempt…   more terrifying than shooting unknown and potentially lethal chemicals into your veins, more terrifying than robbing depraved drug dealers or engaging in unprotected sex with strangers or endangering the ones you love in order to obtain your next high. It seems insane, and that is only because it truly is. While we are using we are so out of our minds that the true terror of certain situations does not even faze us. However, the concept of putting down our favored substance and facing reality sends most active addicts running for the hills.

What we don’t know scares us. Moving to a new city, maybe even a new state, unsure as to how we’re going to support ourselves, all of these uncertainties combine to leave us with a gaping pit of fear deep in our stomachs. While the concept of a higher power is one that will need to be addressed eventually in order to maintain sobriety, calling on faith can prove exceptionally beneficial when addressing this fear. Trusting that everything will work out exactly the way it is supposed to will do you much more good than living in the fear of something inevitable.

You may believe that relapsing is equivalent to failing. Fortunately, this is not the case. Although relapse is never necessary and can always be avoided, if it does happen to you the option to pick yourself back up and persist is always available. The only way you may “fail” yourself is if you throw in the towel entirely – so no matter what, don’t give up!

The reality is, life is difficult sometimes. There are taxes and bills to pay, adult responsibilities to take care of, and unfortunate events that may transpire at any time. But reality is often, and more frequently, absolutely beautiful. If you numb reality with drugs and alcohol you will never experience the awe-inspiring beauty of life. And no problem is so big that you will be unable to handle it.

People that don’t drink and don’t do drugs are lame prudes, right? Actually, people who are not actively drinking alcoholically and slowly (or rapidly) killing themselves with excessive drug use are pretty cool. Wetting your pants and punching strangers in the face is not where it’s at – neither is sitting alone in your basement and constantly shooting heroin till you pass out. Sober people tend to be exceedingly happy people. Why not give yourself a chance to find out?

The responsibilities of adulthood can be frightening, especially if you have successfully evaded them for years. If you are considering getting sober, it is time to man up in all regards and begin paying your bills again. Growing up does not mean ceasing to have fun. It simply means being responsible and taking care of yourself.

Fear is a horrible emotion … there is no reason to allow it to control your life… there is hope for everyone caught in the throes of addiction! But first you must reach out…

This is my journey … this is my life