I hate funerals… not because of the passing of a person from this life to the next, that’s simply part of the package deal when you’re born. There has to be an exit strategy, or we’d all be stuck carrying on the same conversations at the same miserable jobs with people we honestly would never associate with outside of work.

What I hate most about funerals is people pour their hearts out about how much someone meant to them or provided for them or changed their life. Seems a little late  when the host of honor has left the building. They didn’t hear it, and no one in the audience wants to hear it… say what you need to say while the person is around to hear the message.

Here’s my message to my dad…

My dad is the kind of guy that has gone through life unnoticed. I’ve never heard anyone say a bad thing about him… anyone. I’ve never seen him smoke or drink or act inappropriately. Wait… I take that back; I remember as a kid, a guy at a Volkswagon dealership overcharged him for a repair and when my dad complained the man made some smart ass remark and dad punched him in the face… bam! Right in the face… at Tom Bush Volkswagen in front of God and everyone! At 6 years old … that was cool!

My dad comes from a long line of nice people. They work hard… they stay on the same job for 30 years… they buy homes, have children, vote, and enjoy quiet lives. These are the types of people that don’t look for problems, so problems don’t look for them. It’s a real life with good results for those who finish the race. For those people, nice things are told about them at their funerals. 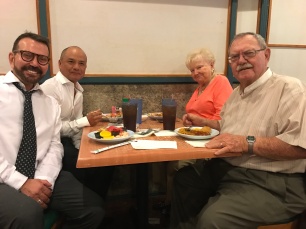 My dad was a high school dropout who lied about his age and entered the army as a teenager. At 21, he was out of the military and back in high school getting his diploma. Upon graduation, his father offered to buy him a gas station or help him through college. My dad knew life would be better with an education, so with a wife and two kids, he entered MTSU and started building a life… that’s when I came into the picture.

My dad always provided for his family. He never made a lot of money, in America, school teachers are financially punished for educating the next generation of success stories. I won’t get started on the disparities in fair and just wages, especially when it comes to teachers other than to say it sucks! 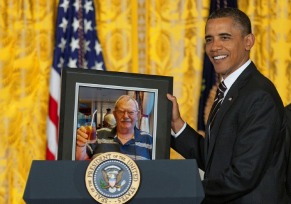 Dad always worked two jobs; he taught high school during the day and the GED program for adults at the community college at night. Every summer he would leave Florida to work on his master’s degree at Western Carolina. That took years to finish, but he did.

In my lifetime, my dad has been a teacher, a janitor, a pest control man, a security guard at a grocery store, a Gideon, a sports announcer, a Sunday school teacher and a decent guy.

Each morning, he would get up early make breakfast for me, kiss me on the forehead and tell me I was his “little buddy.” He washed every item of clothing I ever owned, hung it on hangers or put it away. On Tuesday nights, he would bring me a donut he picked up at a little place on 103rd Street on the way to teach night school. In a world of uncertainties and variables, he was my constant.

In high school, we were always together. He was a history teacher and football announcer. He was at the dances, fundraisers, swim meets ( yes, I was a swimmer), senior prom, senior trip, field trips… he was always there. It was during my teenage years I realized people genuinely liked him. I understood why… he was a decent man.

For years, I was no one’s idea of a dream son. I have crashed and self-destructed so often and so severely there is no reason I’m still alive. During those days, the stability that I grew up with remained with me and waited for my return to life. My dad calmly and patiently stood near and picked me up, brushed me off and waited to see if I would make it. Finally, it happened. I got clean and sober, and he was there.

I owe him an enormous amount of love and respect because he deserves it.