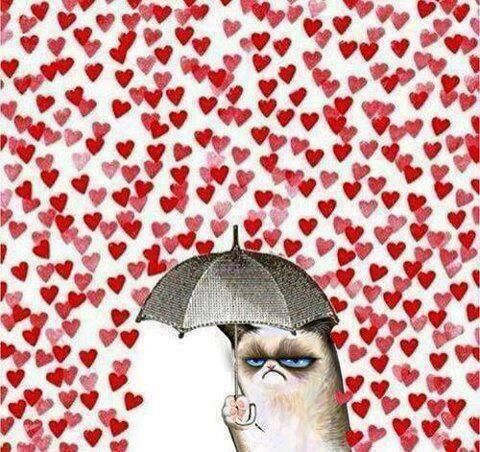 I love the feeling of being in love or falling in love or thinking about love. I’m normally not happy when the “love buzz” ends and I’m stuck with yet another mistake or as Madonna calls it a “substitute for love.” My first Valentine’s Day in L.A. was spent with a friend at some swanky little bistro that held about 20 people. It was cramped and overpriced with candles and that stupid red glittery confetti people put on tables at parties. I hate that stuff… it’s like “oh, look! There’s festive shit slung everywhere… this is going to be a great night!”

What I remember about that night is paying too much for a “lovers meal” created by Chef Blah-Blah and looking at all of the Malibu Barbie & Ken looking couples wearing too much cologne and laughing too much and too loudly. No one in the room seemed at ease in the environment… and I was feeding off their anxiety. I’d given up on love so long before that meal that someone should have picked up my tap as an act of loser charity.

My friend is one of those guys who is lucky in life… he’s a wealthy doctor, drives a BMW, owns a loft in downtown LA with an amazing view and looks like an underwear model. We both have enjoyed pampered lives… he worked for his and I got lucky and fell out of the right woman at birth. It doesn’t matter how you get to a place as long as you get there …

My friend was freshly out of a relationship and about to dive back into it with the same person. That never works for me… I tend to throw a match on things and watch them burn. No one has ever asked me back for a repeat performance. What does that say about them? Hmm?

typically cost half the price the other 364 days of the year: flowers, candy, and even dinner prices get tripled because of all the suckers going all out on every Valentine’s Day purchase. Since you don’t have to worry about spending half your mortgage on gifts that don’t make it to the end of the week, take half of that money and spend it on yourself. Buy that guy gear you’ve been eyeing since before Christmas, splurge on a new wardrobe or just drop it all on a guilty pleasure like a massage. Be your own Valentine. Do whatever the hell you want. Declare it a “Me Day” and go out and have fun. No one will even notice. They are all too busy crying and whining because they are not in — or sometimes because they are in — a relationship.

You were invited to a couple of parties but respectfully declined because all the festivities would include couples. Why not go for a little while anyway? Drink and eat on another guy’s dime and still leave with time to go out and hit a couple of bars after the party hits the wall. You never know — a few single women could also be in attendance, upping your chances of getting a little box of chocolates of your own on V-Day (yes, that was supposed to sound perverted). You could also hit a bar, go to a show or anywhere else where other single people are hanging out.

Do nothing at all. Being single on Valentine’s Day is the one time you’re allowed a “Get Out Of Jail Free” card to spending money on sports tickets or a headbanger band in a crappy part of town and extracurricular activities your imaginary girlfriend would probably disapprove of. Just stay home, veg out on the couch, fart, and be glad you’re not dropping a couple of bills on overcooked steak and watered-down drinks. You can go out next weekend and rub all the money you saved in your hitched friends’ faces.

Tear it up with your buds

Men always have at least one or two single friends. It’s just the law.  They’ll be spending Valentine’s Day alone as well. Spend the night with the other guys who don’t have a significant other. Don’t settle for the typical night; make it a colossal night. Go for dinner, drinks, to a bar or even for just a night of gambling at someone’s house. Blow off some steam and forget all about the love-and-hearts crap. You also don’t have to worry about any of the holiday talk creeping into the conversation unless it’s: “Man, am I glad I don’t have to waste time on that Valentine’s junk.”

It’s Valentine’s Day. Alone. Big. Farking. Deal. Just because it’s a day that everyone else is celebrating doesn’t mean you’ve got to observe and celebrate. Just pretend it’s an average day: go to work, go to lunch, go for after-work drinks, flip on a Netflix movie and do all the things you’d do on a normal, boring day. It only lasts 24 hours, and you spend the majority of that time in bed or at work. It will all be over soon.

This is my journey… this is my life!